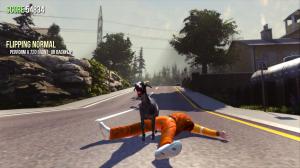 Goat Simulator was released on Tuesday April 1st, but this was no April fool’s joke. The games concept is that you get to play the role of goat in a sandbox style game filled with achievements and interesting things to explore and challenges to try and receive points. The game contains no storyline, you are just a goat free to explore and try to accomplish as many achievements as you can. Achievements range from doing a successful backflip, to trying to get your goat high into the air. Your goat has the ability to lick objects which then attaches to objects and allows you to drag the item around. You can also head-butt things or even unsuspecting bystanders. One of the most unique abilities is the function to turn ragdoll mode on and off which gives a an experience strangely similar to a skateboarding game by allowing the player to go off ramps with their ragdoll goat and get points of high air with their goat. This also turns on automatically whenever you fall and don’t land correctly. The game adds some extras in the custom game option under Mutators, a jetpack that allows you to speed through the map faster and definitely get some air. Different Mutators add different extras to your goat and can be unlocked by playing the game and acquiring achievements. In the game you can’t die, you just automatically turn on ragdoll mode and then have to simply turn it off again which makes you stand back up. The game is teeming with interesting things to explore like homes, fields a building under construction, even a hidden skate park, . The game supports Xbox 360 controllers you just plug one in and play the game. The game offers a very unique experience, it is very fun and the only con would be the lack of multiplayer support. It delivers what it promises and is well worth the $9.99.