John Vesely, better known as the one-man band Secondhand Serenade, performed a captivating nine-song set to a packed crowd of “emo-ites” at Sacramento’s Ace of Spades club on March 19, 2012.

The charismatic Bay Area native, who was raised and still lives in Menlo Park, Calif. (a small city situated between Palo Alto and our mutual birthplace of Redwood City), began his opening stint for YouTube sensation Boyce Avenue by emphatically asking, “What’s up neighbors?” before launching into set-opener “Vulnerable” – the sole single off of his first studio album, 2007’s “Awake.”

Vesely is a lot of things, but insincere he is most certainly not.

“I’m here to sing about things that matter,” said Vesely before he launched into “Maybe” – a song off of his debut album, which he would admit to the already-fawning crowd “I did by myself… No, actually I did it with you. So thank you!”

Vesely, the spawn of a family of musicians, began his musical career at the age of 12 by spending eight consecutive years playing bass guitar in a variety of Bay Area acts spanning genres that included ska, rock and pop.
END_OF_DOCUMENT_TOKEN_TO_BE_REPLACED 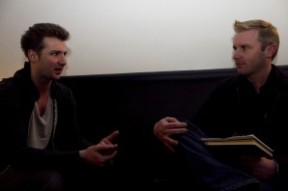 Prior to a March 19 tour stop at Sacramento’s Ace of Spades club, The Current’s Mark Lewis was given the chance to sit down opposite John Vesely who you may know better as the one man band Secondhand Serenade. Vesely is an extremely popular musician who’s accomplished yet grounded and passionate. During the interview, he touches on beginning his career, his current venture involving PledgeMusic and his ongoing tour with YouTube sensations Boyce Avenue. Click here for a full review.

The Current: Thanks a lot John for taking the time to sit down and speak with us – I know you’re set to take the stage in a half hour or so.

Secondhand Serenade: My pleasure – thank you for the opportunity.

With three studio albums under your belt and a passionate fan base that follow your every tweet, describe to our readers how you began making music and what it was like when you didn’t have a room of people singing along with you during your entire set each night.

In the beginning when I recorded “Awake” before it was re-released, I spent a lot of time – like four or five hours a day on the computer pushing it. I wasn’t just being like abrasive but I wanted to get my music out there and just allow people to hear it and let them know that it’s out there. It really all started picking with MySpace which an amazing vehicle for “Awake” because the site had a lot of tools on it that other social networking sites don’t have anymore. For instance, tacking a song onto your page then letting people click on the player which would take them to a band’s page. Me, Colbie Caillat, Hollywood Undead and a lot of these huge artists were found through just doing well on MySpace and the reason for that is because MySpace had lots of things that you could customize like banners, songs and links. It was great. I had a really a cool time getting my career started. Now I’ve kind of come full circle because I’m about to embark on that exact same journey in a sense. I just recently left my label and I’m about to really do the exact same thing as I did early in my career with MySpace only this time on a much bigger scale.
END_OF_DOCUMENT_TOKEN_TO_BE_REPLACED