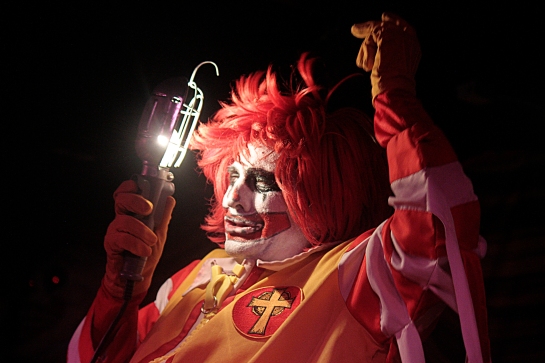 It’s not an unusual sight any Friday night at the Holy Diver Bar to see drum sets and guitars up on the stage, but a giant cheeseburger, a clown, a cat burglar, and a purple Grimace, might be considered an unusual sight to see  on any stage.

Mac Sabbath is not a typical Black Sabbath tribute band because they  not only play Black Sabbath music but they incorporate the world famous McDonalds characters into their imagery.

The band consists of lead singer Ronald Osbourne, who is a take on Ronald McDonald, the drummer Catburglar, who is a take on the Hamburglar, and The guitarist Slayer MacCheeze, who just has a giant cheeseburger  head with gigantic horns that sticking out of his cheeseburger face, and last but not least the bass player Grimalice, who is Grimace. All well known Mcdonald’s characters.

On stage Ronald Osbourne envelops many of Ozzy Osbourne mannerisms. Ronald walks the walk in a mirror image of Ozzy when he’s on stage and he even has the Ozzy stare.

The band performs many Black Sabbath songs, but replaces the words with a fast food spin, such as Black Sabbath’s famous song “Iron Man,” which is changed to “Iron Pan.” During the song Ronald is cooking hamburger patties in his Iron Fry Pan as he tosses a hamburger beach ball into the audience.

The night was full of puns, such as calling Sacramento, “Sacramentos the Fresh Maker,” Ronald refers to the Mentos slogan the Fresh Maker.  Also Ronald makes fun of non existent bands that he claims are copying him such as “Dairy Quensryke” and “Twisted Sizzler.”

The show had a good mix of all sorts of fans, such as a group of fans in their early 20’s decked out in Mac Sabbath T-shirts and wearing clown makeup resembling Ronald Osbourne  himself.

All in all they put on a great show, mixing hard rock with the all American McDonalds hamburgers, so if you are looking for something different, like hamburgers and Ozzy this is the show for you.