Mike Martin guitarist from All That Remains sat down with us before the performance at the Monster Energy Drink’s Aftershock Festival. 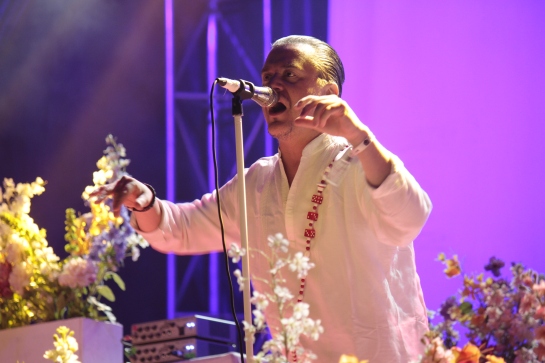 Mike Patton of Faith No More Preforming at Aftershock PHOTO BY: Bryce Fraser 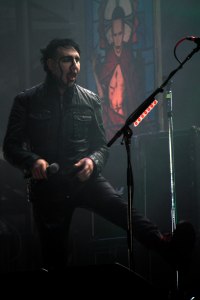 Gibson Ranch was filled with thousands of concert goers to the fourth annual Aftershock Festival in Sacramento. Bands such as, Slipknot, Shinedown, and Marlin Manson were heading Saturday. Sunday’s headliners included, Faith No More, Deftones, and Jane’s Addiction. For the past 3 years The Aftershock has been hosted at Discovery Park, but due to the event gaining attendees over the years it took place in Gibson Ranch where more than 37,000 people attended. Gibson Ranch also offered camping for concert goers.

Slipknot was the last band to perform on Saturday and was the main Headliner of the night. The production value alone gave fans a show worth their ticket price. Slipknot’s Chris Fehn , and Shawn “Clown” Crahan, both were on separate drum sets on each side of the stage that spiraled around and went up and down. Craig Jones, the keyboardist, also was in the background on a contraption that moved him from left to right. The whole performance was accompanied by fire that mimicked the beats of the songs. All show aside, Slipknot played flawlessly giving a good mix of new and old songs, such as “Psychosocial” and “The Devil In I”. They gifted fans with a song they claimed not to have played live in a while which was off their first album “Me Inside”. They finished the night with an original song “Surfacing”. 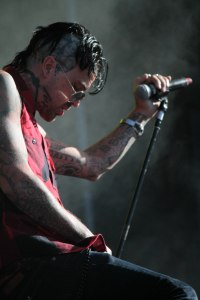 Shinedown also included fire into their performance by actually shooting out rays of fire that resembled the colored rays of the concert lights. Fireworks also shot out from the back of the stage and all together gave off an amazing aesthetic to an already talented band. Shinedown played a mix of their hard and soft rock songs. They ended the night with two crowd favorites, “Simple man”, and “Sound Of Madness”. Brent Smith really showed off his tone range with “Simple Man”, which the band played acoustically. To get the audience back amped up they played “Sound of Madness”.

Marylin Manson provided a very theatrical show to fans. He walked around on stilts and long crutches and came out on stage with a burning bible. He walked into the photo pit next to fans while singing. He stabbed his wrist with a broken beer bottle, and even shot mucus out of his nose. Manson gave fans a show and the outrageous parts were really what you would expect from a Manson show which he delivered to fans. Manson played “Deep Six” from his new album, but mostly played his classics, such as his cover of Eurythmics “Sweet dreams” song . He played “The Dope show”, and finished the night with “The Beautiful People”. 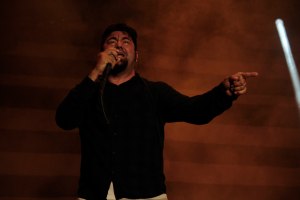 Hollywood Undead started the crowd off with their first hit “Undead”, then “Been to Hell” to get the crowd excited. The set’s mood changed to more easy going party songs with “Coming N’ Hot”, and “War Child”, and” Bullet”. They finished their seven song set with “Day of The Dead”, and then Everywhere I go.
Sunday night’s big headliner was Faith No More. The band came out all in white with the stage surrounded in floral arrangements. The different colored stage lights shining onto the flowers created a very colorful sensation to the eyes. After their set eager fans requested more songs and were rewarded with an encore. They ended the night with “we Care A Lot”, and then “Just a Man”.
The Aftershock Fest only gets bigger and better every year and it shows that Rock still lives on through the massive numbers that converged on Gibson Ranch last weekend. 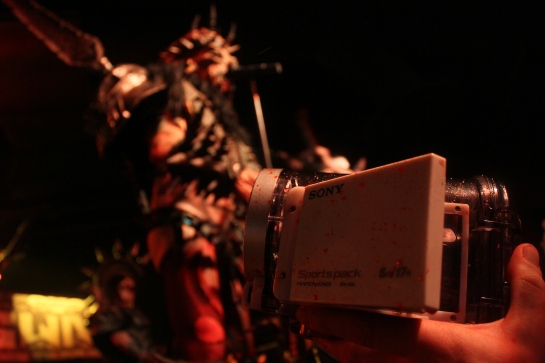 A quick scan of the crowd made it apparent that a majority planned to document the event via constant, blurry cell phone pictures.

A handful of photographers at the event, however, were there to do a job, donning press passes and 15 pounds of gear which appeared to get heavier as the three nights wore on.

Yet many of them are unlikely to receive a paycheck for their work.

A music photographer may be in a constant state of unpaid internship status, often working to convince clients that his or her work is of monetary value.

“When it’s something fun, like concerts or even a sports game, you’re expected to do it for the experience,” Fraser said.

Unfortunately, the cost of a professional grade camera and the various lenses one may need for different jobs quickly adds up, said Carlos Almanza, a photographer at XSiGHT Productions studio in Downtown Sacramento.

“Cost-wise, the gear runs for about $5,000 but I’m fortunate enough to have a studio that backs me and allows me to use the gear for free,” Almanza said.

Almanza, who studied video production and film at the Art Institute and boasts seven years of experience, still finds himself bartering his work for studio time for friends’ bands.

The problem, he said, lies in the misconception that professional-grade photography is as simple as aiming the camera and pressing a button.

“I would say that it takes a certain amount of skill to take a legitimately good photo,” Almanza said. “You need to know your light and composition, because it’s way more than just picking up a camera, saying ‘stand here,’ and pressing the shutter.”

It is difficult to draw a discernible line in the sand to separate those who are considered “real” photographers from those who are not, Fraser said. Some say it all depends on whether or not one earns a paycheck, while others say a degree or a varied portfolio is necessary.

“The line is definitely blurred,” Fraser said, “(but) having some knowledge of photography and what makes a good photo helps. It is an art form, but not many people treat it as one.”

Fraser recounts last year’s After Shock festival, where bands including Weezer, the Offspring and Awolnation took to the stage at Discovery Park in Sacramento.

Almost a dozen people in the photo pit — an area directly in front of the stage barricaded off from the rest of the crowd and only made available to those with press passes — used nothing but iPads and cell phones.

There is a level of professionalism that Fraser said is disappearing, which makes it harder to leverage one’s own abilities when discussing pay.

Despite the frustration of being expected to work for free, however, some photographers say passion will always be a driving force when deciding what projects to take on.

“One time, a band and I set out in the snow with a couch to take promotional photos in the snow,” said Allen Daniel, freelance photographer for 1906 Studios and Joyus, an online department store.

Though woefully unprepared in only a pair of skinny jeans and a windbreaker, Daniel laid in the snow to get the “perfect shot,” something he said he didn’t think twice about.

“It felt like my fingers were going to fall off and I couldn’t feel my feet,” Daniel said with a laugh, “but I definitely learned my lesson and it was blast creating those images for the band.”

No mater the project, the more creative the picture, the more work and expertise it likely took to make it happen, Daniel said.