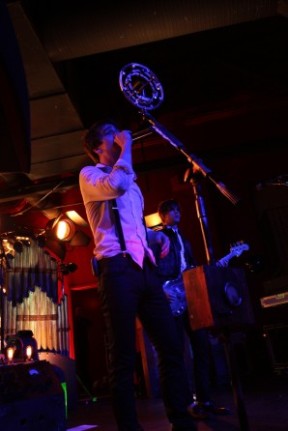 I’ll be the first to admit that seeing a concert at a club or small venue can best be described as that stereotypical “box of chocolates” – I just never know quite what to expect. Rarely does anyone get the chance to see artists or bands that are currently nestled at or near the top of the Billboard charts in an intimate setting where ticket prices hover around $25. I got that chance recently and decided to open that box of chocolates and found them to be truly delightful.

On Aug. 10, 2011, downtown Sacramento’s Ace of Spades hosted two of the biggest emo-pop (yeah, it’s a genre!) of the mid-to-late 2000s. Emo (short for emotive) is a type of music that relies heavily on expressive and personal lyrics and strong melodies. Bands including Jimmy Eat World, Dashboard Confessional and New Found Glory opened the “God**** door” to the emo-pop scene in the months following 9/11.

Their style of music would ultimately pave the way for the evening’s main attractions; Patrick Stump — lead singer of Fall Out Boy, producer, and frequent collaborator with acts like Gym Class Heroes) and Panic! at the Disco – a multi-platinum band who began as a Blink-182 cover band before being heard by Fall Out Boy bassist Pete Wentz who immediately signed the band to his record label and took them under the tutelage of Fall Out Boy.

Opening for Panic! was Stump, embarking on tour in support of his first full-length album, “Soul Punk,” which was released on Oct. 18, 2011. Free from the burden of dramatically high expectations that are inescapable when you happen to be the lead singer of Fall Out Boy (everyone exhale, I got the chance to interview Stump before he took the stage and the band is taking a “break, NOT breaking-up”).
END_OF_DOCUMENT_TOKEN_TO_BE_REPLACED

Mark Lewis, News Editor sits down with Fall Out Boy’s Patrick Stump, to discuss the band, his solo career, and his new album “Soul Punk.”

Mark Lewis:  Patrick you’ve acted on television, been the lead singer of an enormously popular punk band, produced music, learned to play multiple instruments and now you’re entering the arena of the solo artist. You’re only 27-years-old – what have you yet to accomplish that you’d like to?

Patrick Stump:  I mean I haven’t done… well I don’t know. I guess I haven’t made the perfect record yet but I don’t know that you ever get to that. It’s the thing that keeps me going. I was just watching an interview with Tony Bennett and he was asked how he keeps going after doing decades of shows and he’s like he wants to keep doing better than the one before. The longer I do it and the more I know – the more I want to do it.

Mark Lewis:  With February’s “Truant Wave – EP,” you wet you fans’ appetite for your first full length solo album, “Soul Punk,” which comes out on October 18th. What can we expect from the new record that is different from the six songs on “Truant Wave – EP?”

Patrick Stump:  It’s a lot funkier. On “Truant Wave”there was a few of songs that might have made sense musically with “Soul Punk” but not lyrically. “Soul Punk” is much more the funkier side of “Truant Wave.” I think “Soul Punk” is a lot funkier than “Truant Wave” and I don’t mean that word in the crappy high school flat-based punk band kind of way.  I mean Rhythm & Blues, Hip Hop and Soul music are all influences on what I do. The most recurring comparisons that I’ve gotten are to Prince and Michael Jackson. In fact, many people will say that my music is just a Prince knock-off or a Michael Jackson knock-off and I think people saying that makes me happy because it doesn’t sound like the same thing.
END_OF_DOCUMENT_TOKEN_TO_BE_REPLACED 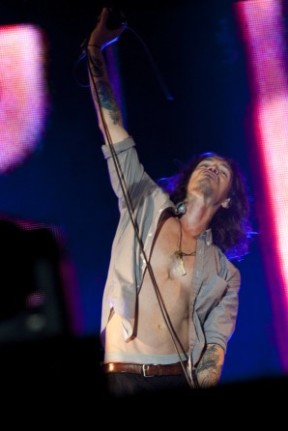 Once thought to be a musical genre dead and buried, progressive alternative rock lives on!  Case in point – Incubus’ Oct. 11, 2011 performance at Sacramento’s Raley Field was an inspired two hours of pure heart-pounding rock and roll.

Twelve years after Incubus helped helm the creation of a new progressive alt-rock genre with their debut album “Make Yourself,” the band returned to Sacramento in support of their recently released album “If Not Now, When?”  A 71-degree evening welcomed those in attendance who were treated to a set-list peppered with hits from their catalogue of seven studio albums.

Incubus opened the show with the first single off of 2004’s “A Crow Left of the Murder,” a song which features lyrics that proclaim “hey megalomaniac, you’re no Jesus, yeah you’re no f***ing Elvis.”  The huge LCD monitor backing the band flashed the words “Jesus Saves” – perhaps an attempt by the band to let the crowd interpret the lyrics in a couple different ways?  I’ve personally never worn blue suede shoes nor have I turned water into wine.  For all you megalomaniacs – it comes down to whether or what Jesus saves.

By the time many bands reach a certain point in their careers, even a smash hit like 2001’s “Wish You Were Here” can have the potential to sound old and rehearsed.  Incubus’ rendition of the song sounded as fresh as it did 11 years ago when lead singer Brandon Boyd performed it live to audiences who were still spending their afternoons glued to the television watching MTV’s “Total Request Live.”

The audience chanting “I-I-I-I-I wish you were here” in unison made it perfectly clear that they were more than happy to be packed shoulder-to-shoulder standing on the baseball diamond where the Sacramento River Cats play their home games.
END_OF_DOCUMENT_TOKEN_TO_BE_REPLACED