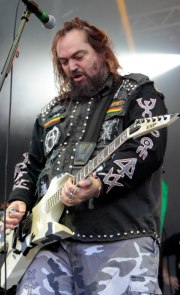 Once again hundreds of people ventured to Discovery park last weekend to partake in the sold out event  the Monster Energy Drink Aftershock Festival. This year brought more metal bands to their lineup and that had sold out.

Only at a Slayer concert will you hear people cheerfully sing the words “God Hates Us all.”

Slayer is not only an influential band within thrash metal, but their music helps spawn both death and black metal. To say that the band is monumental is a vast understatement.

Hence the reason why their audience at Aftershock sang along eagerly to songs like “Angel of Death,” the song that is inspired by Josef Mengele, the person who was responsible for human experimentation during the Holocaust.

Slayer’s set list celebrated their career’s catalog by playing songs that dates back to “Show No Mercy.”

Tom Araya was hitting notes that wasn’t seen much since “Reign in Blood” during his performance on “The Antichrist.” His guttural vocals on “Hell Awaits” sounds as if belongs to something that lurks beneath the land and that lies just south of Heaven.

“This is a love song,” Araya described their “Dead Skin Mask,” which was about the infamous killer Ed Gein. Gein has a huge impact on pop culture in general, such as inspiring movies such as “Psycho” and “Texas Chainsaw Massacre.”

Slayer’s live performance captures the horror movie imagery that their albums invoke. It’s no wonder why this music scared the crap out of parents.

Meshuggah is so metal, when the day comes when one of the band members dies, doctors are going to find a terminator like skeleton. Their set list at Aftershock in Sacramento only served as further evidence for this theory.

If there ever was a band that deserves the metal label, it’s Meshuggah. The sound the body creates, invokes images of machines in operation. Jens Kidman manages to hit every word with each chaotic note.

While some members of the audience could argue that Meshuggah’s songs sound the same, they sound nothing like what was at Aftershock to a point where they sound as if they were out of place from the rest of the festival.

With their complicated time signatures, Meshuggah showed how metal could be both extreme and sophisticated.

When Anthrax started their act with “Caught With a Mosh,” it became clear their set will be mostly from their earlier years.

While their setlist also included newer songs such as “Fight Em ‘Til You Can’t” and “Breathing Lightning,” they feel like they could belong on “Among the Living.”

I have a theory that by bringing Joey Belladonna back on the lineup is to invoke nostalgia from their fans similar to J.J. Abram’s sequel to “Star Wars.”

While Anthrax was never as heavy as the other bands from The Big Four, but their stage presence makes up for it. Watching Scott Ian head bang and run around while playing rhythm guitar itself was a pleasure to watch.