An interview with the band Otherwise when they played in Sacramento for the Aftershock Fest. 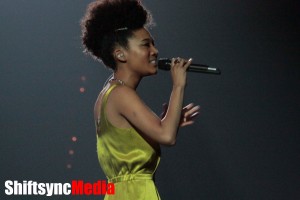 Judith Hill was one of the popular contestants on NBCs “The Voice” season four. Hill was dubbed the winner by many but after her shocking elimination from the show she signed a record deal with Sony. The newest chapter in her career has given her the opportunity to go on tour with Josh Groban for his In the Round tour. The tour landed in Sacramento Oct. 6 at Sleep Train Arena. In addition to opening the show for Groban, Hill also had the pleasure of accompanying Groban during his set for two songs “The Prayer,” which Groban originally sung with Celine Dion at the 1999 Grammys and “Remember When it Rains.” On Groban’s latest record “All That Echoes,” Hill provided her voice on three of the tracks. Hill took to the stage sitting at a piano with a single spot light hitting her, she began her performance with a mashup of Michael Buble’s “Feeling Good” and Michael Jacksons “I’ll Be There.” The songs transitioned smoothly into her original song “Beautiful Life.” Hill’s soulful voice and passion made her performance unforgettable. Every word she utters sends chills down your spine, you end up hooked on every single word she is singing because you believe she means every word she is saying. Towards the end of the song the lights were dimly lit and the band and her background singers appeared on stage. The tempo suddenly picked up and the group started playing towards the crowd. Hills set included four songs and loads of personality at one point one of the members of her band brought out an inflatable trumpet and pretended to play it. Hill and members of her group also did a chain around the stage showcasing their instruments to the crowd and dancing. Her personality really showed when she and her two background singers during an instrumental solo started doing the dance “kid ‘n play” and the robot. The last song in Hills set was her original “Taken” which brought the tempo in the building down a notch. The ballad was written about professing your love to someone who you will love forever. During this song she had a beautiful range and tone and you could hear all the distinguishing characteristics that make her voice so soulful and mesmerizing. A portion of the song Hill decides to sing in French and she mashed it up with “Beautiful Life.” The strong soulful voice of Hill was even more impressive in person. A gorgeous tone and hypnotizing range make her performance unforgettable.

Josh Groban has a voice that most people would appreciate but his playful attitude during concerts takes fan appreciation to a whole new level.

When he’s not wowing the audience with his enchanting voice, he reminisces on the past, tells jokes and interacts with the audience.

His In the Round tour stopped at Sleep Train Arena in Sacramento Oct. 7, with opening act Judith Hill (The Voice and 20 Feet From Stardom) who sings multiple songs with Groban, he showcased a seven-piece band, orchestra musicians and backup singers, was a relaxed show full of memories mixed with an elegant and mesmerizing performance.
END_OF_DOCUMENT_TOKEN_TO_BE_REPLACED