The Last of Us:

A game developed by Naughty Dog, the same people who brought us the Uncharted series is coming out with The Last of Us. The game has you surviving an Post Apocalyptic style world full of mutants and people wanting to do you harm, while trying to keep a young girl who follows you alive.

Metal Gear Solid 5 / Ground Zeroes: Metal Gear fans  rejoice, the return of Snake is here! Konami is not telling us if it going to be our Solid Snake who was left in old age in the previous game, or some other clone of Snake. Either way we are thrilled to be playing Snake. Many questions are still left unanswered, will Ground Zeroes and MGS5 be two separate games entirely or a package deal? And what is the XOF, that seem to mirror FOX hound?

Beyond: Two Souls: The game trailer features Ellen Page from movies such as Juno, as the lead character sitting in a police station being questioned right before a swat team comes to try and bring her in. The game has you fighting off soldiers with your mental powers, and is from the same creators as Heavy Rain. Ellen Page, super powers, and from the creators of Heavy Rain, Say no we are definitely keeping an eye on this game.

Grand Theft Auto 5: The next chapter of the GTA series takes place in the city of Los Santos, a fictional version of Los Angles, so player should expect to hang with the rich and famous in Vinewood, go take in the beaches, and of course all the exciting car chases and gun battles that the series is known for. 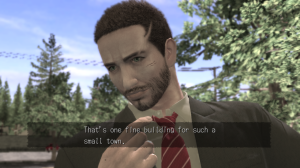 Deadly Premonition: Directors Cut: One of the strangest and addicting games to date, explore the town of Greenvale looking for a murderer in and play this updated version of the Xbox classic.  Agent Francis York Morgan is now coming to a Playstation 3 near you, loaded with better graphics and add-ons.